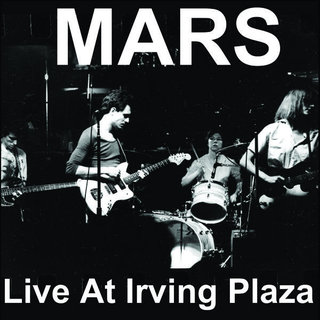 I bought a copy of the new archival Mars "Live at Irving Plaza" LP (Feeding Tube Records) last week. I opened it and put it on while a friend of mine was over. He listened for a few seconds, shook his head, then quipped, "Why the hell would anybody put out a live Mars record?" I said, "Well, this is a historical document for the few dozen people that really care, and a fetish item for several hundreds of record collectors who buy everything that certain arbiters of taste tell them to buy." I fall into the former category.

I wasn't too crazy about the previous live Mars LP, "Live At Artists Space". Neither was my guest columnist. The layout was pretty boring. The audio quality was pretty lousy. It didn't seem worth the money. My pal said, "Come on, this thing is, like, a bootleg. Why would you even press something like this? It should be a torrent on some bootleg site, or something, and just call it a day." I agreed with him about the Artists Space gig being a bit non-essential, even for hardcore Mars fans. The record didn't live up to the label generated hype on any level. It was a disappointment.

I'm happy to say that the Irving Plaza release is a big improvement. The cover features a crisp scan of a photo negative featuring the band live on stage. The lp comes with a download card for both the Irving Plaza and Artists Space sets. Also, in the package is a carefully done, small-format 20-page booklet by Byron Coley and Thurston Moore, featuring an in-depth look at the rise and fall of Mars, featuring newly released oral history tidbits from a wide range of relevant characters. It's a fascinating read and might just answer any remaining questions anybody has about the topic.

I think the TLC put into this release shows and, although I think the audio probably could have translated to vinyl better than it did at the cutting stage, the performance is really killer and the impact of the atonal terror the band was wreaking at the end of their brief career is amply displayed.  I was was hoping that I would never have to say that the MP3 download version sounded better than the LP, but there you have it. Welcome to 2012. Buy the record, read the book, listen to the MP3s endlessly and shelve the vinyl quickly.

At this penultimate performance by the band, on August 4th, 1978, the savage deconstruction of musical values displayed by the quartet culminates into a seething vortex of atrocious proportions. Mars sound extremely tight and well-rehearsed. Their execution has a sharpness and focus which elevates them from being an average-joe noise band to the historical juggernaut they are. There's no dicking around between songs: these folks are not messing around. The first half of the performance features some familiar titles: "Puerto Rican Ghost" and "Hairwaves" from the "No New York" compilation (Antilles, 1978); "Outside Africa" and "Immediate Stages of the Erotic" from their posthumous EP (Infidelity, 1980); and "Fractions" from the long out-of-print "Live" CD (Les Disques Du Soleil Et De L'Acier, 1993). The overriding feel of these performances is of visceral brutality. At times, the entire ensemble seems to be pounding their instruments into submission like a deranged drum corps. The music is wholly atonal and histrionic, but structured in succinctly wrought vignettes. These pieces are songs, albeit wholly disemboweled and tortured nightmare visions of songs. The vocals are incomprehensible and frightening.

The B side of the record is devoted to an epic fourteen-minute performance of the old chestnut "NN End" (from "The Mars EP") featuring added guitar mutilation by former Red Transistor co-founder Rudolph Grey. The added density pushes the piece over the edge into a hellish inferno of disjointed noise. There is a lurching rhythm section pulse underlining the composition, but it is victimized heavily by the broken-glass spray of the strings. Despite all the intentional chaos of the performance, "NN End" is a gripping piece of total tension which keeps revealing layers of density and improvisational invention. The pacing is intuitive and captivating. Around 6:30 the intensity ratchets up several notches and begins to approach the unbearable, anticipating the sound approach esoteric bands like Hijo Kaidan would eventually make their whole career out of. Excellent.

These archival releases are not the best place to begin investigating the band, but "Live at Irving Plaza" in particular will satisfy those looking to find another piece of the historical puzzle.

AN OVERVIEW OF THE MARS CANON
Posted by ugEXPLODE at 10:57 PM 2 comments: