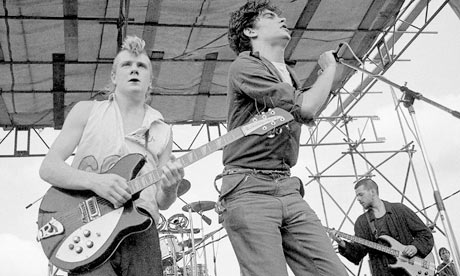 
Recently WFMU broadcasted this year's Primavera Sound Festival from Barcelona, Spain and one of the headliners was the reincarnated lineup of The Pop Group, featuring a majority of the members from their prime incarnation (I vastly prefer their work with second bassist Dan Catsis, cf. my earlier TPG blog post).

I listened to the time-delayed broadcast with disappointment. The tempos consistently lagged across the board. Now, to be realistic, The Pop Group are not hormonally addled 16 year old boys anymore, but . . . the group is getting the instrumental timbres, general attack and song selection right, but I really want to hear this material at the blistering tempos they were once played at. It just doesn't sound right to me otherwise.

So, for my personal use, I have electronically sped up the Barcelona broadcast by 15 percent, without altering the pitch. I believe this gives one a fairly accurate portrayal of what the new Pop Group might sound like if their asses were still totally on fire. I give them a B+ for effort, but wish they would pick up the pace . . .  a lot of bands have come back sounding a lot worse. I wish them well!

WW
Posted by ugEXPLODE at 11:17 AM No comments:


THE ASSAULTIVE NEW STUDIO RELEASE BY THIS DISSONANT,
FUTURISTIC NOISE-ROCK INSTITUTION FROM PITTSBURGH.
A GNARLY GLIMPSE INTO THE FUTURE OF ROBOT DIRT!

Posted by ugEXPLODE at 1:03 PM No comments: