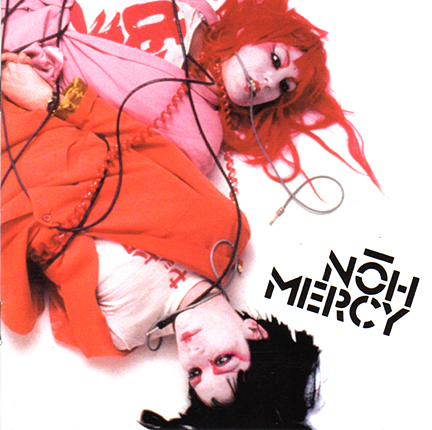 Archival releases springing forth headily from bygone eras somehow make me infinitely more excited than anything being released from the present morass of overkill we currently endure. At the risk of sounding like a moldy fig, there are many elements missing from much of today's music in terms of what I want to hear. Punk came during the Seventies and said "Everyone can do it!" Unfortunately, everyone did it and now one has to dig even harder and longer to find contemporary jewels in this all-encompassing, instantly accessible, post-categorized modern mess.

Noh Mercy were a female duo based in San Francisco during the late Seventies. Their music is powerfully minimal, most often stripped-down to the barest elements of voice and drums, sometimes peppered with raw keyboards or guitar. Anyone familiar with this obscure group probably knew them from a pair of iconoclastic tracks appearing on the murky, elusive Earcom 3 double seven inch compilation on UK post-punk imprint Fast Product Records. The brazenly succinct assault entitled "Caucasian Guilt" from that record featured a panache and solidity which set it apart from the more atavistic musical standard of their New York No Wave counterparts; vocalist Esmerelda's vitriol showed impressive subtlety and range matching the kinetic, precise drum tattoos of co-conspirator Tony Hotel. This was a band as truly talented as they were weird.

The 2012 archival Noh Mercy release on Superior Viaduct begins with "Caucasian Guilt" and includes the other Earcom comp track ("Revolutionary Spy"), eight never-before-heard tracks from the same July 1979 session as well as four stunning live cuts from an August 1979 concert. The studio tracks were recorded in a basement, but they are appealingly transparent and unadorned, revealing the naked focus of the duo's performances. These ten tracks are based on raw invention, not production. Modern bands should take heed of this: ideas before technology. This is why the old shit sounds so good, folks.

After four tracks of the expected drum/vocal duets (including an amusing deconstruction of the Lennon/McCartney chestnut "Girl"), the throbbing "Lines" arrives as a refreshing contrast with Esmerelda essaying coldly over outbursts of percussive slide guitar racket and sour synthesizer. The following  "Bloodhound Blues" is built on a foundation of jazzy tom-tom drum figures and squishy, phased keyboard chords. It is formally traditional in many ways, allowing the passionate vocals to run rampant. Unlike many New Wave poseurs of the time, Esmerelda could really belt out a tune with serious confidence. The melodramatic vocals are impossible to miss and her performances here are intense and colorful. "Cross The Line" and "The Meek Shall Inherit The Mess" continue in the fuller sounding, keyboard drenched mode, while "The Meek . . ." incorporates odd rhythmic meters and tempo changes that reveal musical ambition pushing beyond the other tracks in the "studio" set.

Anyone buying the vinyl version will miss out hard by not getting the four killer live tracks included only on the CD version. The other day I heard a clerk at a record store tell somebody wryly that "vinyl is back." Really? What I see is mindless clones paying 30 bucks for lame back-catalog bullshit that used to be in the dollar bin for decades before this dubious "revival" began. I can't believe how much money people are payign for this shit because they've been told "vinyl is back." Whatever. Congratulations, record industry. You have found a new wave of materialistic lemmings to wallet-rape. I guess, you know, records are, uh, "bigger" or whatever, so, go for it. All I know is I get to savor the frigidly perfect CD audio with the bonus tracks in my lonely little dungeon, sans all the pops and clicks and "warmth" some of you will inflict on yourselves in the dubious name of analog purity.

"Furious" kicks off the quartet of live tracks in a deranged, stop-start construction of barely-contained lyrical outrage and keyboard noise. The oddly idealistic anti-bouncer screed "Storm The Stage" ("...And those dudes with the flashlights/Yelling 'Stay in your seat'/Knock 'em out of your way/Kick 'em with your feet/'Cuz you'll be on that stage!") bubbles along amusingly without drums, Hotel manning an aquatically phased guitar in addition to vocals and keyboards. "Wicked Sister" and "Ode To Frances Farmer" operate vaguely within the same repetitive/motorik realm as beloved period L.A. synth-punks The Screamers, but once again Esmerelda's impressive pipes outclass the competition on the former while the vividly catchy dissonance of the latter instrumental is compositionally distinctive on its own terms.

Noh Mercy hit the skids and went their separate ways by 1980 without releasing a proper album. This great release expands the group's reputation quite ably with careful audio mastering/restoration of the old master tapes and a beautiful layout featuring great photos, liner notes and lyrics. Anyone interested in the top tier of so-called "post-punk" bands needs to run to this release post-haste.

Posted by ugEXPLODE at 5:01 PM No comments: